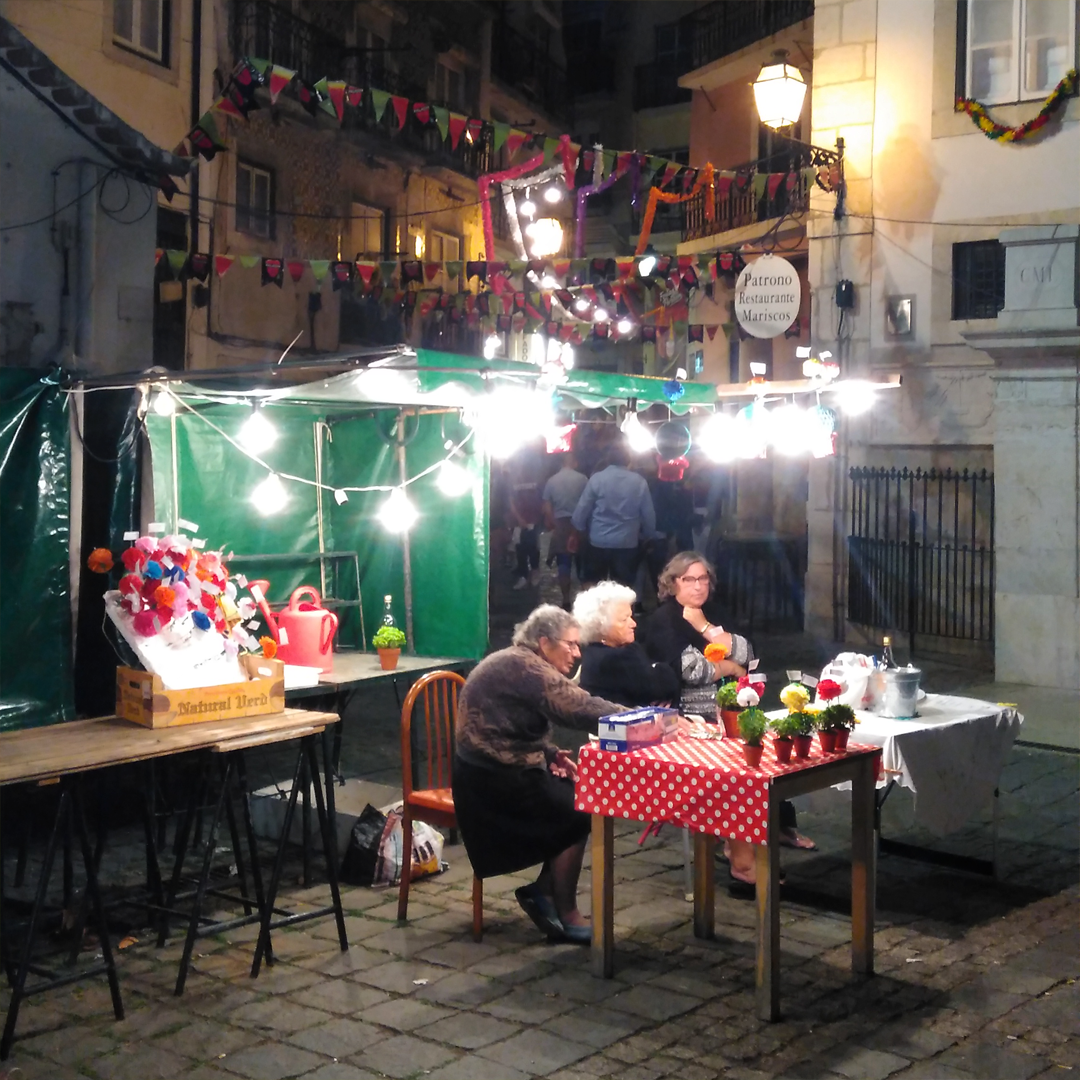 These celebrations are called Festas dos Santos Populares (Popular Saints’ Feasts) and the largest festival in the country takes place in Lisbon during the whole month of June with feasts held in every neighborhood in the city.

June is the month of the Popular Saints – Santo António, São João and São Pedro – with festivals and festivities happening throughout the country.

These celebrations are called Festas dos Santos Populares (Popular Saints’ Feasts) and the largest festival in the country takes place in Lisbon during the whole month of June with feasts held in every neighborhood in the city.

But the most important night of these festivities takes place from June 12th to 13th, when Santo António day (Saint Anthony’s Day) is celebrated.

Saint of popular devotion for centuries, Santo António from Lisbon is not, in fact, the official patron saint of the city.
São Vicente (Saint Vincent) has been the official patron of Lisbon since 1173 and is linked to the ship and the two crows that appear on the city’s coat of arms.

But Santo António was born in Lisbon, in 1195 near the Lisbon Sé Cathedral and died in Padua, Italy, on the 13th of June, 1231.
Among his many qualities, his admirable gift as a preacher caught the attention of his contemporaries, and he was so effective in his speeches that he then became revered by those looking for something lost and for his tenderness associated with popular prayers for the love that one wants to find, hence being celebrated as the “matchmaker Saint”.

Therefore, due to his enormous popularity and great devotion Lisbon celebrates Santo António with lively parties filled with people eating, drinking, and dancing on the streets of the popular neighborhoods, decorated with colorful garlands and balloons.

On the squares and alleys of Alfama, Bica, Mouraria, Madragoa, and Graça everybody joins to eat Caldo Verde with chorizo soup and grilled sardines.

Some high moments and traditions mark these festivities.

THE PARADE
On the night of the 12th of June, a big parade called Marchas Populares (Popular Marches) happens along the Avenida da Liberdade.
Each district performs under an annual theme and the performances include marching bands, dance troops, highly decorative props, and Portuguese celebrities sponsoring the neighborhood.
A jury evaluates the decorations, the costumes, the music, the lyrics, and the choreography, and the sum of these technical notes defines the winner.
Alfama is a regular winner but the dispute is always close and Marvila has recently stood out as a strong opponent.
This year the theme would be Amália (the famous fado singer), but due to the Covid19 social distance restrictions, everything has been postponed to 2021.

SANTO ANTÓNIO WEDDINGS
It was in 1958 that, for the first time, 26 couples were united by marriage in the Church of Santo António.
The purpose of the initiative, sponsored by the Diário Popular newspaper at the time, was to make a marriage celebration possible for couples with greater financial difficulties.
This tradition was interrupted in 1974 due to the Carnation Revolution and all the troubled times that came.
Thirty years later, the Lisbon City Hall recovered the Santo António Weddings tradition with the same purpose of promoting the union of sixteen couples on a memorable day for their families and all Lisbon residents.
On the 12th of June, the eve of Santo António‘s Day, all the city gathers around the Sé Cathedral, just meters away from the Saint’s birthplace, to watch and applaud this mass wedding and the following parade of 16 couples who applied throughout the previous year.
Since 2004 many have been the couples choosing this celebration as their wedding day and there have even been some expat couples applying and marrying.
Today, the Santo António Weddings are a mandatory high point of Lisbon’s Festivities and the couples also lead the Marchas Populares parade that same evening.

THE POPULAR FEASTS
The Santo António celebration is all about the city’s spread feasts and thriving parties.
Everybody joins in the streets to dance, and drink, and of course, to eat.
One of the most festive and popular traditions is the temporary stalls that are set up on the edge of the street or in front of bars and restaurants to serve grilled sardines and Caldo Verde with chorizo soup.
The origin of this tradition refers to a moment when Santo António fed a starving Italian village with fish.
But the Lisboners see this legend much more as a good excuse to eat their favorite fish – grilled sardines – as they’re so tasty at this time of the year and we really don’t know what type of fish Santo António served.

MANJERICOS
Do you know what’s a Manjerico?
A Manjerico is a little pruned basil bush in a terracotta vase. To smell the Manjerico don’t lean onto the leaves and instead use your hand to fluff it and smell it.
Manjericos are a sweet tradition of these Lisbon celebrations.
Partners give to their loved ones these little basil bushes that contain romantic or love poems wishing luck or happiness to that person.
Manjericos are often seen being sold on stalls and flower shops during festivities, and these little vases have become icons of Lisbon sold throughout the year on many shops in ceramic, paper and illustrated versions.

SANTO ANTÓNIO PROCESSION
The final highlight of these holidays is the procession of Santo António, which, on the 13th of June leaves his church, located in Alfama, next to the Sé Cathedral, standing on the place where Santo António was born, and classified as a national monument, and travels through the streets of ancient Lisbon.
In front of this church, the Santo António statue is often venerated by single women who throw coins representing their desire to find a husband.

However, unfortunately, because of the Pandemic, all these events were canceled this year, but don’t get discouraged because the spirit of these holidays remains and some suggestions allow us to celebrate Santo António in a different way, homemade style.

To dance all night the popular Portuguese singer Toy will perform a digital feast on June 13, from the LAV – Lisbon Live – with no audience, but with a live broadcast by Gigs platform Home. Each ticket costs 2 euros.

The Santo António Church in Lisbon has a program of celebrations and activities, which can be consulted on the website or on the Facebook page, and the “Santo António bread” – a blessed bread, which, according to tradition, should be kept for a year so that the family does not go hungry – can also be ordered by email, or via the website, and received at home, by post.

The Lisbon Sardines Festival 2020 contest also took place “under quarantine” and elected seven illustrations out of a total of 3639 applications from 53 countries. You can see the winners of this contest here.

As for sardines, you can buy them in local markets, gather some friends, and grill them for a tasty feast.
If you don’t have an outdoor space or grill, some companies are delivering.
Liz Garden, has a Marcha da Bica Basket, to order 24 hours in advance.
and until June 14th, you can also order the Santos em Casa kit (Home Saints kit), through Uber Eats where, with a pack of beer, cans of sardines, and items related to Popular Saints are offered.

As for decoration, the Portuguese sauces brand Paladin is offering kits with ornaments and flags to various to encourage the popular saints’ party to be held on your balcony or window.